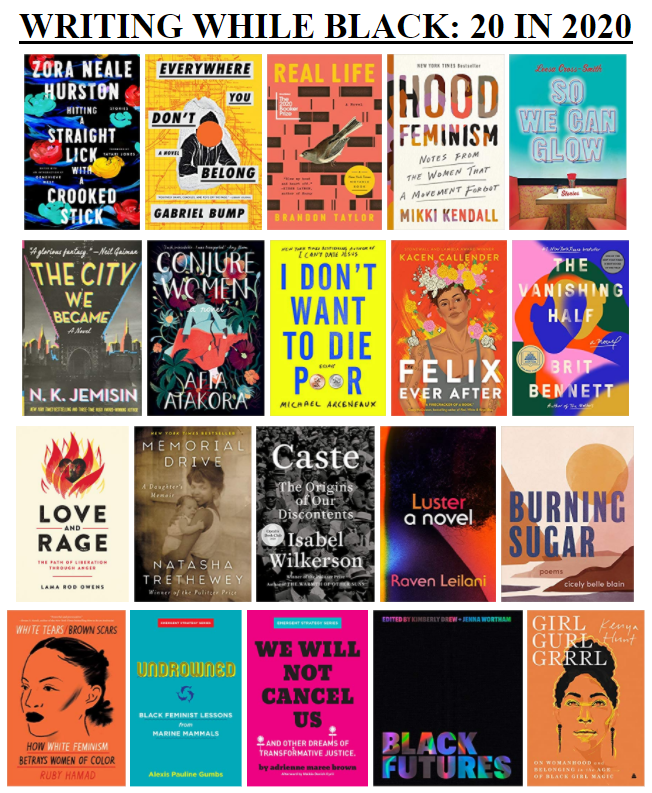 In February 2020, the Wright College English Department constructed a hallway gallery of Black visionaries in the writing community that highlighted authors who broke ground in specialized areas of writing in their respective time periods. That was the inaugural year of the English Department’s Writing While Black series (i.e., an annual Black History Month series). This year, the English Department has decided to focus on one time frame in particular: the year 2020. It was not the first year but certainly one of the most pronounced years of the Black diaspora unapologetically voicing that this, too, is our world. Thematically, we selected 20 texts spanning all twelve months of 2020. These texts of various genres were authored by people who wielded their Black perspectives to speak on the nuances of Black experiences. Featured below, the 20 texts range from newly found and published fiction of the legendary Zora Neale Hurston to Kimberly Drew and Jenna Wortham’s anthology of Black art, writing, and other creative work. After reading a quote from each text along with the text title, author or editor name(s), and publication date, feel free to submit any and every text that you read in 2020 by an author of Black/African American, Afro-Caribbean, African, and/or any other African Diasporic descent by clicking here.