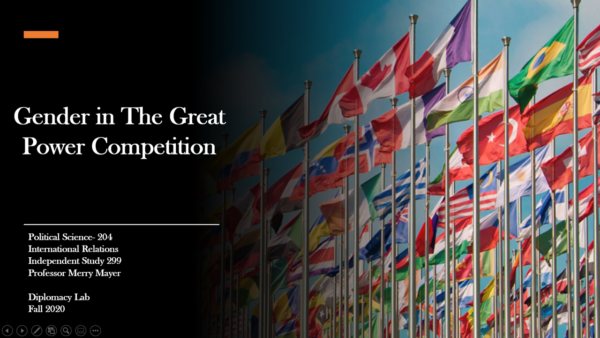 Wright College students are already making their mark on the world. In two classes in Fall 2020, students took part in Diplomacy Lab, working with the U.S. Dept. of State to produce research to further U.S. foreign policy goals.

In Political Science 204, Introduction to International Relations, seven students virtually presented their Diplomacy Lab Project, “Gender in the Great Power Competition,” to 37 Dept. of State personnel, one of whom was Ambassador-at-Large for Global Women’s Issues, Kelley E. Currie.

The project examined both the role that women play in negotiating successful peace treaties (the research shows that including women as negotiators make peace treaties 35% more likely to last 15 years) and the benefits of a more gender-equal society (it makes conflict less likely).

In Dr. Beverly Bennett’s Anthropology 202 sections, fifteen students compiled a comprehensive directory of Artic-region museums, cataloguing their missions, audiences, resources, facilities, and online websites. The State Dept. was very impressed with their submission and is in the process of using it to draft a blog post.

We would like to congratulate the following students for their work on these projects:

Leonardo Adrianzen , Julian Diaz, Asonme Fozong, Allan Macias, Shivam Patel, Maryann Rodriguez, Donna Vician among a few others for their work on the project, “We Come from the Land of the Ice and Snow: A Network to Connect Arctic Museums.”

Wright is one of just 39 colleges and universities in the nation (and the only community college) partnered with the U.S. Dept. of State to undertake research for them. Other partners include Yale University, University of Notre Dame, Tufts, Georgetown, and Oberlin College. Wright has been a Diplomacy Lab partner since Spring 2016 and since then Wright students have participated in 14 separate research projects.